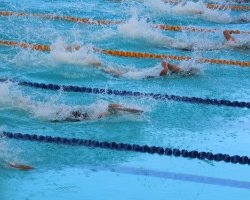 Over the last week I had the opportunity to watch the Victorian Age Swimming Championships in Melbourne, Australia.

I have put together my top 10 observations from the Championships and provide it as a learning tool for age group parents and swimmers.

1. Swimmers Must be Race Fit

For swimmers doing multiple events on the one day or over several days, swimming down after each event was crucial. As the swim down pool was in a different location to the competition pool, the responsibility of swimming down correctly was often left to the swimmer’s themselves.  This meant that swimmers who had been ‘trained’ by their coaches to swim down correctly had a distinct advantage.  Many of the younger swimmers struggled to swim down properly unless their coach was present to guide them.

3. Grazing is the Key

All competitors had to find ways to continue eating and regaining energy throughout some very long days.  With warm-ups beginning 7:30am for heats and 4:30pm for finals, the better swimmers were often at the pool for more than 8 hours a day.  To eat effectively, a majority of swimmers brought food with them to the meet as the food on sale was not appropriate for aiding performance.  There are a huge variety of appropriate foods for swimmers to graze on throughout the day. These are identified in www.NutritionForSwimmers.com for those who are looking for help with identifying the right foods.

4. Keep Warm Between Warm-up and Each Swim

The temperature varied each day with some days at 18 degrees Celsius (64 degrees Fahrenheit) and one day at 40 degrees Celsius (104 degrees Fahrenheit).  For a majority of the Championships it was important for swimmers to stay warm.  I was amazed at the number of swimmers who warmed up well and then sat in the stands with a t-shirt on, especially on the cooler days.  The more prepared swimmers would ensure they wore a tracksuit and shoes to keep their feet warm, for as long as possible leading up to and between each swim.  On the hot day, most swimmers adapted well.

The importance of remaining hydrated throughout such a long meet can not be underestimated.  Many swimmers were observed continually sipping on water throughout the day, with a majority of them carrying their own water bottles with them down to race and for use immediately following their swims.  Dehydration will affect performance and us the week got hotter, there were definitely some children who did not perform as they could have.

It was quite obvious to observe which swimmers had spent time developing their skills against the majority who showed poor skills on a regular basis.  The wide variety of starting techniques and entries into the water leads me to believe that a lot more focus has to go onto the development of skills in practice.  There is no point continuing to race as you get older, doing the wrong skill.  In general, the skills improved the older the swimmers were (it would be disappointing if they didn’t!) however there were still swimmers in the 16 to 18 year age group who struggled doing effective starts, turns or finishes.

This is the big one and an area that coaches must continue to address with their squads.  Learning the correct technique at a young age is crucial if swimmers are to go on and reach their potential.  There were so many swimmers winning races in all age groups under 15 years who had ordinary techniques.  It was obvious that they achieved their results based on hard training and guts and determination in both practice and competitions.  Technique includes the arm pattern, leg kicking action and the timing of these both, together with the correct breathing action and timing.  If there is one area where the standard of the Championships could have improved it was in technique.  This is an area that needs more focus.

Swimmers with proactive coaches who offered guidance to their swimmers seemed to get better results than those swimmers whose coaches were not in attendance.  It was great to see that a majority of coaches were heavily invested in their athletes and spent a lot of time working with them, encouraging and supporting them.  Some coaches spent a long time talking to their swimmers before races whilst others reminded swimmers of the 2 or 3 things they had been working on.

Parents play a major role in supporting a competitive swimmer and this was definitely the case over the past week.  Parents had to play many different roles including taxi driver, food supplier, emotional supporter and many of them also offered to time keep throughout the meet.  Maintaining a positive outlook regardless of your son or daughter’s performance is critical to providing support to them.  Swim meets can be emotional times for parents as they have invested so much time and energy into supporting their child.  I was delighted to get feedback from a number of parents who had read www.SwimmingForParents.com.  All of them provided examples of how the book had helped them to improve the support they provided to their child at practice and during competitions like this one.

For many first time swimmers and their parents, a 6 day meet with heats and finals and the stigma of being the most important State level meet of the year meant that there were many nervous people at the Championships.  For many swimmers and parents they experienced situations for the first time.  These included:

– Competing at this level for the first time;

– Competing in a meet with heats and finals and having to come back a second time on the same day and aim to swim even faster;

– Attending sessions that lasted up to 5 hours;

– As a parent, watching your child compete in their first final, and many more.

Overall, the Championships were run very well and their were a large number of Interstate and International swimmers present.

To look at the results of all events and age groups, the link can be found at www.LiveSwimmingResults.com.

10 Responses to Observations from a State Championship Meet