By Gary on October 29, 2014 in Backstroke, Breaststroke, Butterfly, Freestyle

Now I am going to disclose that I know Ian Pope quite well and in fact was his roomie at the Trials when he made his first Olympic Swim Team as a coach in 2000 for the Sydney Olympics. It was a very exciting time for Ian.

I have admired Ian’s ability to work with athletes for a long time and in particular his ability to communicate effectively with the athletes in his team.

In each of Ian’s Swimming Down Under Series, he has taken everything one step further to explain to you the ins and outs of swimming for all four strokes.  Throughout the series he looks closely at body alignment, kicking and arm actions, breathing and stroke efficiency, starts, turns and finishes.

Check out Ian’s Swimming Down Under Series at Championship Productions. 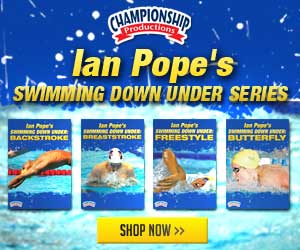 The Swimming Expert
Swimming 100m Butterfly for the First Time